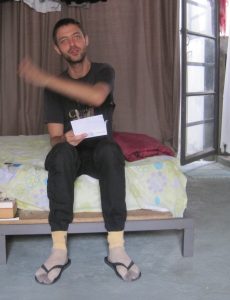 “It has been a little more than a year since I left Rio de Janeiro and right now I couldn’t be further away. I’m writing this from an old wooden cabin with no electricity and running water, in the middle of the Swedish forests covered in snow. It’s early morning, it’s pitch dark outside and there are no sounds except from my own breathing and this pen moving on the paper. It’s freezing cold and I’m sitting right next to a stove and a pile of firewood, my only light source is a candle gently swaying. There are no other houses close by, no neighbours, no traffic, just trees and trees and frozen lakes and rocks covered in icy moss.

At this very moment I couldn’t be further away from Capacete in Rua Benjamin Constant, but still it feels so close and so much a part of my body. In fact, not a single day has passed in this year where I haven’t thought of my time in Capacete and Rio, I only need to close my eyes and all the noises and smells come right back to me. It can happen any moment and anywhere, when queuing in the supermarket or driving on my bike through Copenhagen, then suddenly out of nowhere I’m taken back to Benjamin Constant, to Capacete where I lived for a long period and spent most of my time: I hear the sounds of kids playing next door, the dealers shouting in the street outside, a stereo playing music from a neighbour’s window or a singer from the music school practising her scores. I see faces of people, friends and strangers passing by. I remember conversations we have had, meals and presentations in the yard downstairs. I can vaguely feel the hot days and the heavy rains, the moist and the sweat. I think of talks, laughters, discussions and fights; of days imbued with so much joy and high-spirited inspiration.

These sensations also come to me at night when sleeping and they often do. I have had so many weird dreams taken place in or around Capacete, but last night’s dream is the most vivid and I feel like sharing it with you, so please bare with me: Capacete had taken the form of some kind of boat or ferry full of decks and cabins. There was something slightly decadent about it, like a yacht from the 70’s, rusty in some places but still grand in its appearance. Other times it was more like a vessel, a watercraft simply floating onwards. On board we were mostly just a few passengers: me, Helmut, Andrew, the captain and a bunch of wild monkeys (sagüis). But sometimes other people would hop onboard and stay for some time and at one point there was suddenly a massive crowd partying on one of the upper decks. There was no doubt that Helmut owned this boat, but he was not in charge of it. The captain was an older Filipino man and he had a very rowdy way of steering the ship. We were on some unknown Brazilian river, long and curvy and also very narrow at times, almost to the point where we couldn’t pass, so the captain would bump the ship from side to side, forcing us through. Sometimes it felt like being in a rollercoaster in an amusement park, full-speed down a waterfall, other times it felt like we were slowly free-floating and barely moving. I never got the feeling that we knew where we were going, but no one seemed to mind, sailing, floating or river-fating down this endless stream of water. Helmut and Andrew were always in a funny mood and would climb around on the railing of the boat; go on land for days and then return. They always seemed busy with something and it was clear that they were enjoying themselves. And so was I, although I was more of an observer and never understood what we were up to, but still it felt important to be there and I never considered leaving the ship. …

It was a long and lucid dream full of details, one of those dreams that can stay with you for hours and days, perhaps even months. I know my time in Capacete will stay in my body for the rest of my life and I am so grateful for the ride.