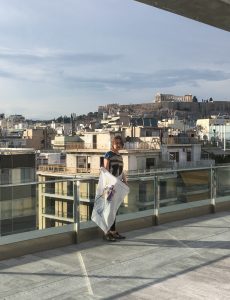 Hope you are fine.

I was thinking about you those last few days as people from my residency are asking to me to answer to three questions. I am sure you had to handle with them also in your life. I think you also probably provoke them, not waiting from others to ask them to you.
If I am looking closely to the questions, for sure, you didn’t really think about the first one. Even if I would be very happy to hear your opinion about what is a helmet for you? And I can bet that you would answered something like: the best thing to protect your head when Ben Patterson is crashing a violin on it.

Anyway, it is probably a good excuse for me to answer to this question as I have now to explain to you what I understood after 5 months of residency of what is CAPACETE for me – for sure, as I can only perceived and then speak from my own subjectivity. CAPACETE is called after the bad pronunciation of the first name of its director, Helmut/Helmet/CAPACETE in Portuguese.

A CAPACETE is related to the head and Helmut is, let’s say, a strong-head as the head of CAPACETE. From his head to earth is born a place where in a very specific space and time people are invited most of the time to take part of a flux of ideas, words, actions, experiences, conversations, knowledges, sharing, etc. and to immerse themselves in the Brazilian daily life in general and the carioca one in particular.

CAPACETE’s action is mostly to create, maintain, nourish, an international network which can take part in researches, creations, thoughts, processes connected to the Brazilian territory and social situation.
If I am looking at your manifesto, I see some common points:

So, this year, CAPACETE had invited 13 residents to be part of its immersive, intense, experience. Since the beginning, the idea is somehow to create a “group” – which was not the principle before from what I understood. This “group” has to share some common situations which are somehow participating in the fact of creating a “group”: collective housing for most of the residents; collective seminars and workshops; collective participation in the organisation of CAPACETE’s weekly events.

Indeed, it seems very fast that the question which appeared was to ask how to start as a group (a number of persons or things ranged or considered together as being related in some way) to realize some collective (Relating to or shared by all the members of a group) actions and share collective experiences.

In search with a definition of “collective”, I found yours – it seems that Beuys is quoting you in another letter – I think it is a very good definition. But, how were you dealing with your strong/big/imposant ego, dear George? How people were subscribing and possibly unsubscribing from your collective? Do we need some rules written? How can we be sure to know exactly if we are sharing the same desires, ideals? And how are we deciding what should be collective or individual actions? I just remembered you postcard to Nam June Paik

And wonder if the collective is always bending personal will.

I start to think deeply that groups start to be collective when they decide to be a collective. In other terms, when some people start to join each other, create a group, in order to share actions, energies, thoughts and desires, then they are on the way to be a collective.
Other kind of groups are related by circumstances like teams, classes, employees, etc…. and are most of the time WORKING together in order to reach a goal which is outside each individuals.

In CAPACETE, there is one group, and few appearing collectives. Individualities remain of course. The notions of group, collective and individual are all mixed together here. It is surprising to understand that most of the tensions we have as a group come from finding a way to create a conversation between those three poles: each one seem to be afraid to disappear because of the interaction with the others. But we all know that creating a common project should not exclude the differences. Big egos should survive :). I guess, the group will find a way to create a shared situation where collectives and individuals can follow their paths in and outside this specific group; or how common energy can unite various goals, desires and trajectories.

If not, the Flux could be interrupted.

Ok, I suppose that’s it for tonight. The date of my letter is already wrong now. I spend to much time on watching some Jonas Mekas’ video about Britney Spears…. It is weird to think that you even didn’t have the time to hear about her (among so many others).