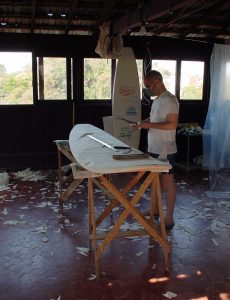 “For an early participant in the Capacete program like me, it’s impossible to separate Capacete from Helmut Batista. Helmut was one of the very first people who was actually interested in seeing my work, and this was way before my sculptures and paintings, when I was still into performance and conceptual art, living in London, around 1998/99. He already had a bit of a bad-boy reputation from his performance antics in Vienna. His approach to Capacete was – from the very start- authorial as much as artist-centered and, unlike traditional curatorial and institutional agendas which need to seek a minimum of approval from public and donors, he seemed to only ever want to engage the artists, as both participants and viewers in an ever growing debate. Ultimately he seemed more interested in art’s iconoclastic powers as a dynamic, as an ongoing questioning of formal and conceptual limits, than in any other aspect.

I took part in a couple of group shows at Capacete, before he invited me for a residency in Rio de Janeiro in 2001, during which our project was to produce my first faceted surfboard sculpture, to be later exhibited in a two-person show -with Enrico David- at the Agora/Capacete Gallery. For that purpose he put me in contact with local board shapers, with whom I learnt basic shaping techniques, which I then had to adapt for my own sculpture. During my three month stay I struggled with this new process, and had to start over multiple times, as mistakes in that particular technique could not be corrected. As the exhibition date grew near, we were forced to reach a compromise and ended up exhibiting a full-scale mockup of the unfinished piece. Although this result was frustrating, it ultimately acted as the gateway for my full immersion into the series, as I fell in love in and with the city, and decided to move permanently to Rio and dedicate myself entirely to the faceted sculptures for the next several years. The first successful surfboard sculpture was only completed the following year, and thankfully many more followed…

I have very fond memories of the time spent at the Rio residency: a warm, welcoming and vibrant place, where Helmut, Denise, Camila and the many others working there acted as generous hosts to the city’s idiosyncratic culture in its various manifestations. A place by artists, for artists, and to this day a vibrant hub for artistic debate, where the local community is able to gather and engage with issues and practices from around the world. After all, more than a place, Capacete is a constantly self-questioning approach, which is precisely what has allowed it to operate so successfully under such multiple formats -from newsstand to gallery to residency to film-school to university- in Rio, Sao Paulo, and now Athens.”