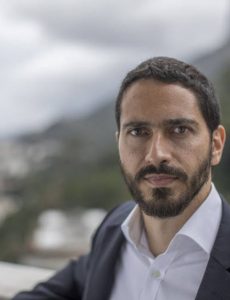 Ronaldo Lemos is a Brazilian academic, lawyer and commentator on intellectual property, technology, and culture.

Lemos is the director of the Institute for Technology & Society of Rio de Janeiro (ITSrio.org), and professor at the Rio de Janeiro State University’s Law School. He is also a partner with the law firm Pereira Neto Macedo, and a board member of various organizations, including the Mozilla Foundation, Accessnow.org, and Stellar. He was nominated a visiting professor of Law, Technology and Policy at Columbia University´s School of International Public Affairs in 2017 and 2018 . He was appointed as a Young Global Leader by the World Economic Forum in 2015. He was appointed in November 2015 as a fellow by Ashoka, a civil society organization founded by Bill Drayton.