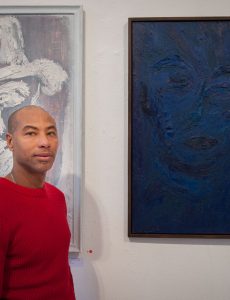 Blueprint Brazil is an outcome of research into Brazilian Art, questioning what is Brazilian art? Or, what makes an artefact Brazilian? In this survey,  meant to function as a platform allowing past to meet present, Brazilian artists from different periods talk about their works and  experiences in connection with sociocultural developments in Brazil from the 1960s to the present day.

This project, supported by the Mondriaanfonds, was carried out in 2017 during a Residency Program at Morro do Capacete, Rio de Janeiro. Keeping in mind Brazil’s sheer size and diversity, I decided to extend the research to other areas in order to get a better grip of different thoughts and artistic practices. The research began in Ipatinga, a city in the state of Minas Gerais, with a symposium organized by architecture students where we discussed Brazilian Architecture in connection with Brazilian Art. The next venue was Belo Horizonte. In Belo Horizonte I visited several studios, art galleries and museums speaking to a number of artists and others working in the art field. I also took part in a discussion panel with artists such as Ana Bella Geiger, Vera Chaves Barcelos and José Ronaldo Lima about Brazilian art before and after Tropicália. The event was to celebrate 50 years of the Tropicalia, a very important Brazilian art movement, which sprang to life in the 1960s. One well-known artist from the movement is Hélio Oiticica. From Belo Horizonte I went to Ouro Preto. Ouro Preto has a historical and political importance that demanded inclusion in my survey. The city has a great number of Baroque buildings and in my view is the beginning and the consolidation of the beginning of Brazilian art. Here the European style mixes with the local touch giving birth to a unique kind of Brazilian Baroque, as it might be called. The visit to state of Minas Gerais ended with a visit to the open air Museum Inhotim where one can see works from Brazilian artists from different periods to the present day. My next city was Salvador, Bahia, where I spoke to a handful of great artists who lived through the military period in Brazil, 1964-1985, and are still active. Among them is Ayrson Heráclito whose artwork had been presented at Venice Biennial 2017. Back In Rio de Janeiro I visited Museums such as MAM,  MAR, Museo do Amanha, Museo do Pontal, Museo de Arte Moderna Niteroi and several art galleries. While in Rio I took part in some art events organized at the Morro do Capacaete. In addition, I spoke to several artists and visited two art schools: the Escola de Arte do Parque Lage and the Faculdade de Belas Artes da UERJ, Universidade do Estado do Rio de Janeiro. In these two schools I spoke with teachers and art students about Brazilian art  in relation with social-economic-political situation in Brazil at the time.

Brazil was said to have experienced an artistic growth in relation with its economic boom that took place  2000 – 2010. In this period, according to some artists, the artistic scene became bigger; this led to the consolidation of new art galleries and museums. However, the current situation present in September 2017 showed  that the artistic growth was experiencing turbulence due to the economical-political crises that  the country was undergoing.

I ended my survey in Brasília where I went to visit the country’s capital created by Oscar Niemeyer.

Blueprint Brazil  is a research project above all into art. A research project that points out differences between past experiences and those of the present time. Questions regarding the Brazilian art scene were discussed with artists, curators, teachers, students and art historians. They all expressed their views and shared their experiences. The talks were held individually and each person spoke out their views about art in relation with all the questions presented  above.

Answers to this research, instead of being explicitly stated in this report, are to be found in a show at WGKunst Gallery, Amsterdam. The four artworks presented in this exhibition were a reflection of all interesting material encountered  throughout my journey. Moreover, all the interviews will be soon displayed on the internet.

This art research is an ongoing project. This report is not yet the end of this survey.