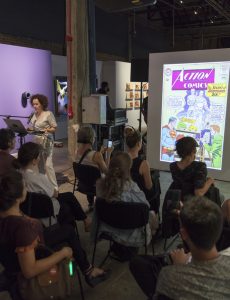 “I teach at UFMG since 2002. In 2018 I will be living in Geneva, in a sabbatical leave. The making of my book was supported by Helmut, who followed up the construction, supportingly, until the end. The research was done for over a year in Geneva, and it is presented in the introduction of the book itself: it is a project of translation, that later developed in an exhibition in São Paulo, where the book played a main role. The work was done away from Rio and somewhat autonomously from Capacete’s space, and I came to Rio to launch it and later do debate about it. There was a nice engagement/ debate after the presentation and it was of course, pleasant as usual, with great culinary, thought especially for the day. I am thankful to Helmut, to have supported such adventurous enterprise, which involved a long production. The book came out as part of the series Livro para…”