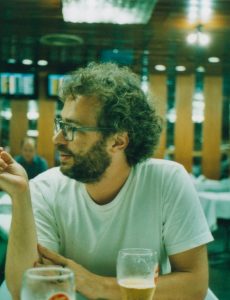 “I first met Helmut in 2006, with Jean-Pascal Flavien. He helped produce a performance of ours titled “Plouf.” The performance took place on two boats off the coast of Rio. The first meeting we had with him was at the beach in Ipanema. I came back to Brazil in 2012, to finally do the residency. I stayed a little over three months. I started learning Portuguese while I was there. Helmut, Amilcar, and I produced an evening of performances or interventions at a theater in Ipanema. I also started a project which I am still working on, and which has taken me twice to the Amazon. Yet the most significant thing that happened, that took place, during this three-month residency was something else, something harder to describe than an activity or an endeavor.

The time I spent in the residency was, in many ways, a break. A hiatus. Though I continued working while I was there, it was not only in a different place but in a different environment. A different atmosphere. And perhaps that’s as close as I can get to defining or describing it. To me, capacete is synonymous with something as simultaneously palpable and elusive as an atmosphere. Every time I return, I encounter a reality whose protagonists change but whose “feel” remains more or less the same. There’s a feeling of openness, of engagement, of trust and sympathy as well, which I identify with capacete. Not that capacete is isolated from the world and its problems, not that it’s in any way an escape, but rather that it opens up onto the world and its problems from within a space that operates differently and with different rules: rules of trust, sympathy, engagement, and openness. These rules are neither stated not even enforced, they are interpreted and discussed, altered and experimented with by each new constellation of visitors, residents, participants. In other words, what capacete inspires and develops is a desire to relate and to relate differently. It develops a sensibility or sensitivity to the other protagonists of our relationships, be they animate or inanimate, material or virtual. Capacete does all of this not by imposing anything on its participants, but rather, by simply inviting them to be both the caretakers and protagonists of its continuous social experiment, one whose strength resides precisely in the inherently fragile and porous nature of its boundaries. Capacete is not a helmet, it’s a tent, and like all tents, it can be pitched more or less anywhere.”