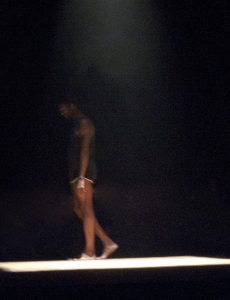 Jimmy Robert (born 1975) works in a range of media—including photography, sculpture, film, video, and collaborative performance—gently breaking down divisions between two and three dimensions, image and object. Robert’s work is guided by an interest in the body and the poetic potential of ephemeral materials such as paper and tape. Creating form through gesture, he draws inspiration from artists such as Yvonne Rainer and Yoko Ono. His exploration of moving bodies, crumpling paper, and repetitive gestures, in works that feature actions such as a hand tearing tape from skin or fingers rubbing a text, has come to define him as an artist of touching.

“These images document places where I did for example a bit of research towards the theater of the oppressed and its remnants in Rio and in particular in this psychiatric institute in Jurujuba as well as an exhibition of Art Brut following the legacy of Doctor Nise da silveira at the Instituto Moreira salles where by chance I discovered the work Ana Cristina Cesar.

There is also a still of the performance I did at the teatro Ipanema with the group of artists/community around Capacete at the time. Finally, a production still of the video installation Vanishing point showed at the 8th Berlin Biennial where I filmed on super 8 the amazing drag performer Erika Vogue doing a dazzling performance of Bate cabelo throughout the modernist edificio Capanema. We also went to Ilha Grange as a group which was a simply unforgettable moment, here you see Helmut with a Penguin which had somehow lost its way to the south.”