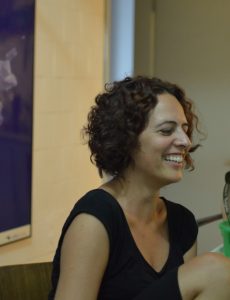 Daniele Marx lives and works in Amsterdam. Her work engages time based practices mainly in the following areas: conceptual art, socially engaged practices and collaborative projects. This practices is presented from various media: publications, events, other formats. From 2008-2010 she holds an Master of Fine Art at AKV St Joost in the Netherlands. Since 2003 she cooperates with the Fine Art UFRGS at extension project Lost in the Space – Ways of Thinking the Sculpture coordinated by Dr. Maria Ivone dos Santos and developed the Project Meio, co-authored with the artist Marcos Sari both in Porto Alegre, Brazil.

In 2012 she holds a residency project at Capacete, Rio de Janeiro, Brazil. Nowadays she works for game entertainment industry and develops her practice in collaboration with artists and institutions. In 2016 she participated in the research group from Erik Hagoort on the project Using Usership. During the experience of four months living and working in Capacete Rio de Janeiro (2012), I tried to establish a dialogue with artists, who attended the workshop Residência + AULA (1), and also with locals. The conversations was about the concept of ‘Tropics’ and the ‘current reality of the country’. In that period Brazil was in a exponential moment of economic and social success according the international media. Having my cultural background as Brazilian living abroad from years I felt the urgency to start the project Diálogo Absurdo nos Trópicos. During the residence a series of events were also held and ideas for future developments. (1) Artists participants workshop Diálogo Absurdo nos Trópicos Residência + AULA: Lucas Sargentelli, Marianna Olinger, Felipe Abdala, Clara Lee Lundberg, Márcia Ferran and Anderson Ramalho.