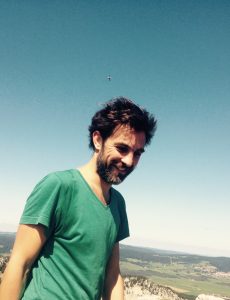 Currently living in Genève, Switzerland. I studied in UNLP, Argentina, and ECAV, in the Master of Arts in Public Spheres program.

“Since some years from now, I’ve been carrying a practice questioning the notions of work and leisure in arts. And I have been participating in a number of projects that confront the relation between text (writing, archive research, etc) and action (performance, publishing, etc). There are existing tensions between visibility and invisibility, questioning the work (of art) and its documentation (or existence). Now these aspects are taking a form of a research in the itinerant project called ECOLE DU NON TRAVAIL (http://www.ecoledunontravail.org).

I went to Capacete in the summer of 2013 to the Universidade de Verao. I was living in La Plata at that moment with Paulina Silva Hauyon, and we both get accepted to this plan, so we went together to this residency. The year before we met Amilcar in an itinerant collective project we were participating, called Agencia de Asuntos Subtropicales, which was organized with Teresa Riccardi. She was who recommend us to apply to come to Rio, and was super prosperous her recommendation. For me it has been a huge personal experience, to get involved in an residency program that connects you with other context which is near but distant at the same time, but most to get involved in a kind of parenthesis, a time lapse that transported me, to involve my body, to involve my mind, in an open experience for discussion and sharing knowledge. Daniel Steegmann was in coordination and lots of presentations, in different ways were done there. There was a space for us to introduce some of our practice in the collective, but also there were conferences and lectures, and dinner, and informal talks, and visits, and tours, and nightlife, and cooking together. There were a lot of sharing moments, a summer atmosphere, the air was heavy and humid, but the energy was high. Aleta, Daniel, Fabio, Gabi, Gustavo, Kadija, Luisa, Luiza, Marcio, Raquel, Rita, Ricardo, Amilcar, Helmut, Manuela, Daniel, Paulina and me. There were huge rains, lots hours of beach, walks in the forest. In that frame, we had exceptional invited guest as Kaira Cabanas, Max Hinderer Cruz, Falke Pisano, Sergio Bruno Martins, and Amilcar also. Some conferences were about the process of exotisation, other about decolonization, other about the origin of capitalism, other about the self-experience of being an artist, other about molecular revolution. I was working at that time in collective experiences related to create links in the dispersion, at the CIA Centro in Buenos Aires, but also about the time and non-effective ways of work. By the end of the residency it was almost carnival in Rio… and everything was having sense. I have to say that this experience reaffirmed my interest in ways of collective research and sharing knowledge processes, to continue in a practice that implode the sense of imposed dichotomies like doing-not doing, material and immaterial, and origin-arriving. It was a wonderful process and a beautiful time that we’ve shared at Rio in that summer.