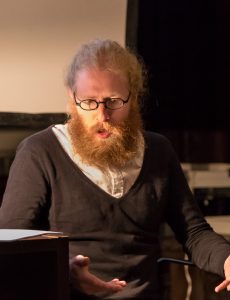 Daniel Jablonski is a visual artist, professor and independent researcher. His multifaceted output combines theory and practice to investigate the role of the individual in the construction of new myths and discourses of everyday life. His works have already been seen in solo and group showa in Brazil and abroad, notably at the Centro Cultural São Paulo, the Instituto Tomie Ohtake, the Museu da Imagem e do Som, SESC Vila Mariana, Sancovsky, Zipper and Bolsa de Arte galleries (SP), as well as at Casamata, Centro Cultural Sergio Porto and Centro Cultural BNDES (RJ), and at Torcuato Di Tella University (Buenos Aires). His writings, including interviews, translations, essays and critical reviews, can be found in literature magazines such as Serrote (Instituto Moreira Salles), art magazines Amarello (São Paulo) and Octopus Notes (Paris), but also in independent publications and academic journals such as Concinnitas (postgraduate studies in art – UERJ) and Poiésis (postgraduate studies in philosophy – UFF-Rio). In 2016 he won the #7 Salon of Artists Without a Gallery Prize (#7 Salão dos Artistas sem Galeria), handed out by Mapa das Artes (SP); and the prize of the #41 Salão de Arte de Ribeirão Preto with an acquisition of the work by MARP. In the same year he was also artist-in-residence at Lugar a Dudas in Cali, Colombia, a residency awarded to him by the Escola de Artes Visuais do Parque Lage (RJ), where he taught for four years. In 2017 he was also nominated to the PIPA Prize. He currently lives and works in São Paulo and teaches at MASP – Museu de Arte de São Paulo.