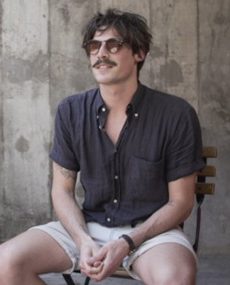 Andrew de Freitas employs a range of mediums in order to explore issues arising from everyday perception and the formation of meaning and feeling. Central to his practice is design and construction, rearrangement of sensory data, experimentation with expanded methods of production and the narrative form.

“One night last year when passing through Berlin I ended up sitting at a big table in some Italian kind of place, with a group of people, all of whom I genuinely enjoy and admire in some way. Which is a nice place to find yourself in. And I think it was Julien Bismuth that said, hey, we should send a selfie to Helmut, presumably to make him jealous or proud – considering that altogether these folks at the table probably represented a strata of at least 15 years capacete, in the sense of capacete being amongst many other things, a diverse and networked constellation of people, who all in some way were connected through Rio de Janeiro. And it wasn’t a milestone or anything particularly remarkable, because for myself and many others there, it’s something that can happen quite often with people you get to know through capacete. And I think Julien took a photo, which I never saw, and we started to talk for while about what it is about capacete that creates this kind of thing. Which I suppose you could call, among many other things, meaningful relationships. There are tonnes of examples of groups, organizations, scenes, cities institutions etc that facilitate friendships and connections, and form also a sense of shared identity. For example, it could be that you lived in a a particular city at a certain time, attended a school or academy, or had some kind of job somewhere, and you have a group of friends or acquaintances that you associate with that time or place, and whom you keep a connection to because of it. But what we were noticing that night in Berlin was that of all the people we know from all those kinds of time and place that we’ve experienced, the relationships that are formed through capacete, often in rio, but not exclusively, tend to be meaningful, and lasting ones. relationships that don’t expire so easily.”